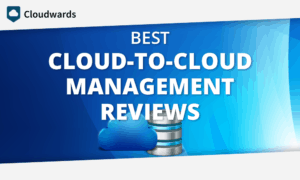 Migrating cloud storage files from one provider to another doesn’t have to be nearly as tedious as you might image. Our picks for the best cloud-based data transfer services — also known as cloud-to-cloud management — which we’re going to lay on you in a moment, make switching up your cloud choices a far easier decision.

That’s good news, too, because from all-in-one tools like those detailed in our best cloud storage guide to services built using cloud IaaS platforms like Amazon S3, there’s no shortage today of options to host files online. A cloud decision that seems smart one day might not look so great later as new Dropbox alternatives come into play and noncompetitive services bow out.

Using a cloud migration tool, you can enhance the power of your own consumerism because there’s nothing to stop you from quickly taking your files — and money — to another service.

For IT professionals in charge of handling their business’s data migration and web-application backup efforts, cloud data transfer tools are also a way to limit the chance for error, ensuring that no file or folder goes missed.

Unfortunately, the options for capable data-transfer tools are pitifully thin at the time of this writing. Truthfully, there’s only one that we’re content to call truly good, and that’s our top pick: Multcloud. Before we get to why we like Multcloud specifically as the best transfer tool for cloud storage, let’s talk about what criteria we looked for in putting together this article.

There are a few different takes on cloud data transfer software out there, most web-based. Some tools, including three picks below, are only designed for bulk transfer, useful for one-time data migrations. Others, as we mentioned, can also be used to create automated file-transfer relationships between clouds, by which we mean one-way or two-way file synchronization.

With that in mind, one of our considerations in putting together this article was a range of file-transfer capabilities. That’s the big reason why we really like MultCloud, which can pretty much do it all. Every other tool we’ve evaluated is limited in comparison.

We also considered the number of services supported. After all, an otherwise capable data transfer tool does you no good if it doesn’t support the cloud storage options you need. Those that also support protocols like WebDAV and FTP/SFTP are favored, too, since those protocols mean more options for you, including moving data from an on-premise server to a cloud server

Value was also weighed when ranking cloud-based data-transfer services. Expensive tools make moving from an overpriced storage option like Dropbox Professional to a better deal far less appealing, whether you’re a home or business user. Unfortunately, value is an area of particular weakness in this market, more so even than features.

Finally, we looked at data transfer speed. Nobody likes to be kept waiting, after all. On that note, it’s time to shut-up about our methodology and get on to the picks.

Multcloud can be used to transfer individual files from one cloud service to another or to perform bulk file transfers. Additionally, it can be used to setup sync relationships, which means that as files get added or edited on one cloud drive, those additions and edits transfer over to the other.

One-way sync effectively lets you backup your services, for example replicating files stored in Google Drive on Amazon S3. For those that use Google Docs to create content, setting up a file backup can ease a lot of worry (read our Google Drive review).

MultCloud doesn’t have every single cloud storage service we could want. However, with over 30 options, possibilities abound. Mainstream picks like Dropbox, Google Drive and OneDrive are there, along with business favorites Box and Egnyte Connect (read our Egnyte Connect review to find out why we think it’s the better of the two).

Two of the best zero-knowledge cloud storage services are represented as well in pCloud and MEGA. Of the top IaaS tools, only Amazon S3 and Backblaze B2 are directly supported. WebDAV, FTP and SFTP are there, though, which opens up the possibilities greatly, something we touch on more in our MultCloud review.

Cost of service with MultCloud is more than reasonable at just $7.99 per month or $69.99 per year. There’s also a limited free version, although it comes with a 2TB monthly cap on data transfers and runs more slowly than if you pay.

With regard to that last point, subscription service with MultCloud means transfers chug along nicely thanks to the ability to run up to 10 data-transfer threads concurrently. There’s no cap on transfers, either.

CloudHQ provides a similar purpose as MultCloud. The biggest difference is that CloudHQ can only be used for cloud-to-cloud sync. There’s no option for one-time transfers, so if it’s data migration you need, you’ll need to consider any of the other four options in this roundup.

As you can read about in our CloudHQ review, the service doesn’t let you share or preview files, either. While we find that to be something of an annoyance, sharing and previewing files can be done with other tools, with Otixo being a decent option for multi-cloud management (read our Otixo review).

For simple one-way or two-way syncs, CloudHQ works great, even if we consider MultCloud a better tool, overall. It’s easy to use and supports a broad range of cloud services.

Those include the standard cloud storage options that most people are aware of, such as the big three. pCloud isn’t supported, but WebDAV connectivity is, which pCloud also supports (read our pCloud review).

You’ll also find many other web-based tools supported, including Evernote and OneNote, what we consider to be the two best note-taking apps overall.

The entire user experience is streamlined and simple with CloudHQ, even though part of that simplicity comes as a result of limited features. Most users, even novices, shouldn’t have any problems setting up their sync operations in a few minutes, whether syncing just a few folders or entire cloud drives.

The cost of CloudHQ isn’t egregious by any means, though if you’re thinking it’ll be cheaper than MultCloud because it does less, you’re thinking wrong. A personal CloudHQ plan costs around $20 per month. There’s also a business plan for up to three users and $50 per month. Additional users cost extra.

CloudFuze provides cloud migration from one service to another. Unfortunately, there’s no option for ongoing file syncs. The fact that CloudFuze ranks third on this list, to be honest, has mostly to do with the fact that neither do our fourth and fifth picks, and they’re more expensive to boot.

For those in need of a professional data-migration tool, the web-based experience provided by CloudFuze is streamlined and migrations run quickly.

CloudFuze supports a good range of services, too, with around 30 in all. That includes personal cloud tools, multi-user accounts and enterprise cloud tools. Cloud storage services of note are Google Drive, Dropbox, OneDrive, Box and Egnyte Connect.

There are also some less-than-sterling inclusions. Then again, not many cloud storage services scream “migrate” more loudly than the security-deficient Yandex Disk (read our Yandex Disk review). SugarSync and Amazon Drive are also included.

Amazon S3 and Wasabi, two of the best IaaS services, are supported, too, as is WebDAV. FTP and SFTP are not, however, so you’ll have to consider other options for server migration.

That cost of CloudFuze doesn’t look like much of a bargain but it is a better deal than Cloudsfer or Mover.io. Therefore, we’ll call it a “plus,” even if it isn’t a very convincing one.

There are three subscriptions to pick from: Basic, Standard and Advanced. CloudFuze Basic costs $9.99 a month for 50GB of data transfer. You can sign up annually, instead, for $99. CloudFuze Standard gives you 100GB of transfer bandwidth each month for twice the cost, while the Advanced plan has a 200GB cap per month for 3.5-times more money.

Oddly, CloudFuze doesn’t have an option to transfer more than 200GB. If you have more to move, you’ll want to consider one of our next two picks, instead.

Cloudsfer doesn’t support as many cloud services compared to the other options in this article, but the 20 it does are all popular picks. The company claims to be able to handle any size of migration and it has 16 years of experience to bank on.

The web-based application used to manage migrations works well enough and you can schedule migrations, run file filters and generate reports to manage things. Multi-user and delta migrations are supported, too, so there’s a lot to like.

Our biggest complaint is the same we have of every cloud-migration service we’ve tested aside from MultCloud: not enough file transfer options. In this case, like CloudFuze and Mover.io, it’s the lack of cloud-to-cloud sync that has us shaking our heads.

For supported storage services, you’ll find Amazon S3, Backblaze B2 and Microsoft Azure supported, meaning there are more IaaS options than with CloudFuze. WebDAV and FTP/SFTP are also options.

The big names of Dropbox, Google Drive and OneDrive are there, but rather surprisingly, Egnyte Connect is not. Box, Amazon Drive and MEGA round out the list of recognizable names.

Rather than a fixed price, Cloudsfer charges per gigabyte. However, there’s a minimum charge for 8GB, which is on the Cloudsfer Personal plan. The cost for that 8GB is $6, which works out to $0.70 per gigabyte. There’s also a Cloudsfer Business plan with a minimum transfer of $25 for 20GB.

Neither rate suggests value by any stretch of the imagination, but at least there’s an option to transfer more than the 200GB you’re capped at with CloudFuze. Also, the rates, are much better than our fifth and final selection, Mover.io.

In addition to either subscription option, you can also contact Cloudsfer for a custom plan. For those businesses that need help managing migrations, that’s a service the company is willing to provide, too, for a price.

Mover.IO was one of the early entries in the cloud migration market and because of that it remains a popular pick. However, when it comes to features, like every other data-transfer service, it’s no MultCloud.

Also, it costs $20 per user per month and that comes with just 20GB of transfer bandwidth. Each additional gigabyte beyond that costs and additional dollar. That means transferring 1TB of data would set you back around $1000.

At this point, you’re probably wondering why we even bothered to include Mover on this list. Well, to be honest, we needed five services, even if ultimately we only can only heartily recommend one.

Well, it has that cool .io domain name.

We hate to disappoint, but when it comes to cloud-to-cloud data migration and sync, the options are few and far between. The abilities to perform one-time bulk data transfers and cloud-to-cloud sync, and run all that with ten file-transfer threads simultaneously, make MultCloud stand out from the crowd.

The other four services are limited and, in the case of CloudFuze, Cloudsfer and Mover.io, overpriced. In truth, Multcloud has plenty of room for improvement, too. However, those improvements are likely to be long in coming unless the competition ups its game.

Of course, we’re always open to other opinions and would love to hear of any tools we might have missed. Share your thoughts on cloud-to-cloud data transfers below and thanks for reading.

Most popular on Cloudwards

A technophile with a love for words, Joseph Gildred utilizes his degree in comparative literature and background as an information technology analyst to ponder the future of human ingenuity. Not one to sit still for too long, Joseph joined the team because cloud technology and hopping from place to place go hand in hand. He has roots in Belgrade, Maine.
Last articles: